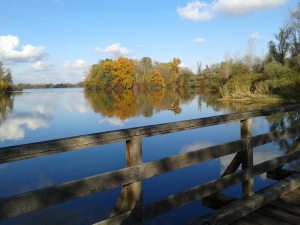 On a sun soaked autumn afternoon I took the Harley for a run, took it because I can.

It might sound slightly obamaesque but that was the main reason apart from warm weather and time on my hands. 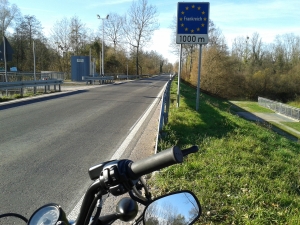 I took it for a run as a statement because statements need to be made just now. Now more than ever, especially statements about freedom.

Normally I would probably have taken a route through France; not only because it is picturesque and quiet but also because it is close and I do the trip to France often, be it for cheaper petrol, tastier cheese or just the fun of being in another country. After all, France is just a 20 minutes ride away.

France is so close

But I didn’t enter France this time, too many controls at the border and a distinct feeling of unease after the terror attacks. I did not want to face police and military all geared up with deadly weapons checking me out. I wanted to celebrate life, feel joy to be alive on the bike after the death toll of Paris. I wanted to get the pictures out of my head, people dying, panicking, and desperate to escape. I wanted to feel free.

To feel free is difficult these days 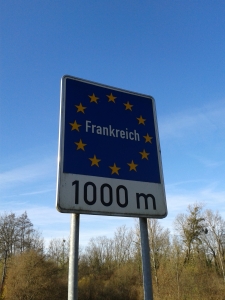 I turned round and shirked France. Only to be stopped in my own country soon afterwards (I was already well away from the border at that time) by the police. Random vehicle checks they said but they didn’t even bother with the exhaust or possible illegal parts on the Harley. That was a first!

Terror throws its dark shade over all of us these days. Fear and retaliation is part of any news item the tv channels broadcast, everybody talks war and the politicians all sound like Churchill to me: “We shall never surrender.” Just like Winston Churchill 1940. We all know how deadly and brutal that war was. There are wargrave aplenty along the Rhine.

How often have I written about riding my motorcycles, how it means freedom to me. And now I am aware how fragile joy and freedom can be, and how importat freedom really is.

All it takes is a massive terror attack just across the border and it is threatened. The retaliation has started, bombs fall over Syria and France is somehow not abroad anymore. It is here and everywhere the terrorists can fire bombs.

The bike now hibernates under white sheets for winter. Strange thoughts of burial and death sheets went through my head as I made her ready to rest for a few months. In France they bury the dead but they do not bury in what they believe: in freedom.

France is everywhere and this is why I call the freedom I got on my run liberté: Out of anger and defiance of anybody who kills at random, subdues women and tries to take away our freedom. 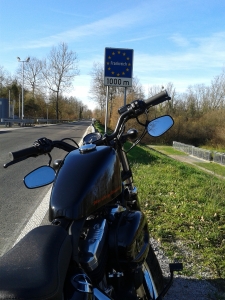 I fear a new age is dawning and it is not a happy one. The fight for freedom has begun. I am just not sure if everybody is aware of the other thing Churchill said 65 years ago. That they would fight “…whatever the cost may be.” 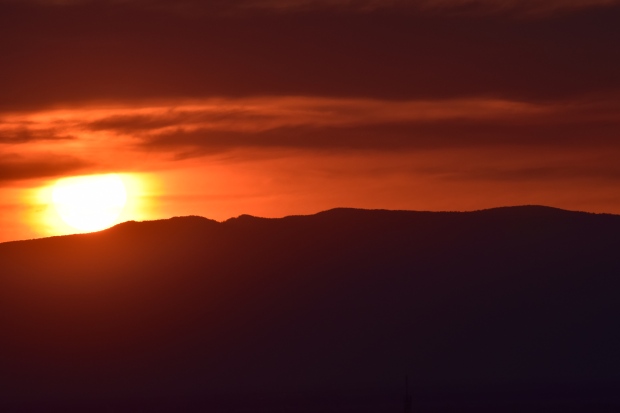 There might be a high price to pay for La Liberté.

I think I am going crazy, nuts, demented. This is surely a weird state of mind I am in just now. I am postponing. Procrastinating.

After having been away for a few weeks you should think the first thing I do on my return is check on my Harley. Take her out for a ride. At least start the engine and enjoy the sound.

The door to the garage remained closed for two days. Grey plastic separates me from my bike, an unmoved obstacle,  that and a hitherto unknown hesitation to face her.  Why don’t I?

For so many days I had missed her, thought about her, wanted her. Now she is within my reach and I do not dare to reach out. Maybe I want to prolong the pleasure, to extend the happiness that soon ….

A touch of fear might be part of it, too. Having a dream is easy. Living with it is a challenge I am not prepared to face, yet. I can feel her waiting for me. At least I think I can.

And still I procrastinate.

After two days I have finally managed to open the garage today. I had to take the car out. There she was, sitting under three crisp white bed sheets. Hidden away. Clean. Waiting.

I will be on Sunday. I think.

Riding Towards Shadows on Amazon

check out the ebook 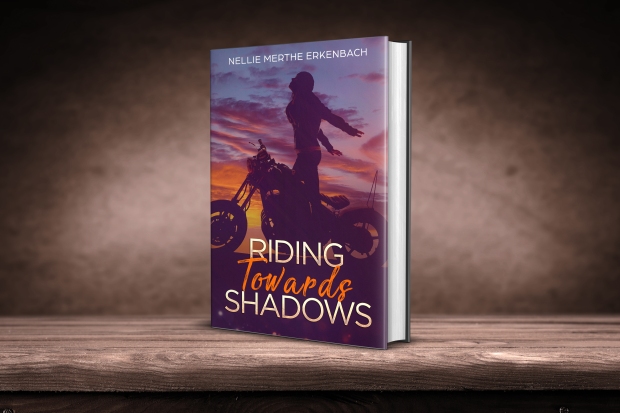 ALL RIGHTS RESERVED. This blog contains material protected under International and Federal Copyright Laws and Treaties. Any unauthorized reprint or use of this material is prohibited. No part of this blog may be reproduced or transmitted in any form or by any means, electronic or mechanical, including photocopying, recording, or by any information storage and retrieval system without express written permission from the author